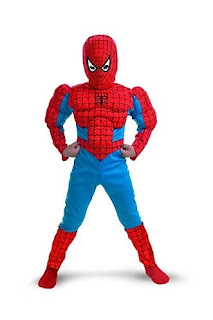 Halloween is that time of the year when we all get the chance to become someone we’re not.  Maybe deep down you have fantasy to be a super hero, witch, monster, or someone famous.

Well that’s just part of the fun on Halloween, and I think that goes for adults as well as the kids. Are you looking for a super hero costume for this Halloween? If so I think Spider-Man fits the bill.

Imagine your little guy or girl all dressed up in a Spider-Man costume, shooting webs around the neighborhood streets. Jumping from house to house for all of those glorious tricks or treats.

Well we all know that they won’t be shooting those webs or jumping from house to house, but what fun they will have imagining on Halloween night.

After all, our little guys and girls are always running, jumping and climbing onto something.

Our four-year-old grandson takes great pleasure in climbing onto the back of our sofa and jumping off just because he can.

Spider-Man hit the Marvel Comic Book scene in August of 1963. Peter Parker is a shy high school student bitten by a spider in science class. Peter then discovers that he has super agility and strength.
Peter is able to climb and cling to buildings, he invents wrist mounts and is now able to shoot webs and can now swing himself from building to building very quickly.

Spider-Man goes on to the fight crime and evil, and in 2010 becomes part of Marvels super hero team, the Avengers. Spider-Man make an appearance the 2016 blockbuster Captain America: Civil War.

I think as long as Marvel Comics continue these super hero characters and making the blockbuster movies, they will remain popular Halloween costumes for both kids and adults.

My favorite Spider-Man actor was Tobey Maguire. Who was yours?

Have fun and above all stay safe on Halloween night.
Posted by Sam Monaco at 7:05 PM