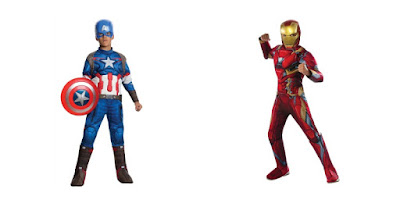 This year there will be many kids and adults alike dressing up for our once a year fun on Halloween. With the 2016 release of Marvels Movie Captain America Civil War I’m sure many will choose Captain America and Iron Man as their Halloween costumes
.
The quick story line of the movie:

For the safety of the public the government gets involved and wants to create an act to control the Avengers and limit their actions while fighting enemies. All of this is in an effort to protect the public. Iron Man agrees with the act but, Captain America does not and sides are chosen, and the civil war begins. I’ll leave at that just in case you haven’t seen the movie.

Who is Captain America?

Captain America dates back to 1941 as a super solider who fights for justice. Steve Rodgers is injected with a serum that gives him super strength and speed. His costume of red, white, and blue resembles the American Flag, and he carries a shield to defend himself against his enemies. He also will throw his shield to take down his enemies. Captain America later becomes the leader of the elite team known as the Avengers.

Who is Iron Man?
Iron Man dates back to 1963 in the Marvel comics. Tony Stark a wealthy engineer is kidnapped and forced to build a weapon of mass destruction. Instead he builds an indestructible power suit of armor to save his life and escape. Tony Stark vowed to protect any threats on America, and soon became part of the team known as the Avengers along with Captain America.

Captain America and Iron Man costumes have been popular for a long time now, and as they continue to make the Marvel Comics blockbuster movies I think these costumes will remain popular.

Your little one will look great in their Captain America or Iron Man costume, as they protect and defend the streets of your neighborhood on Halloween night.

When our kids are just little ones we choose their costumes for them, but as they get older they want to choose for themselves. In my experience as a parent and now grandparent the kids always get to wear the Halloween costumes they choose.

Adults, if you’re invited to a Halloween costume party consider going as part of the Avengers elite team, Captain America or Iron Man.

Have fun and above all stay safe on Halloween night.
Posted by Sam Monaco at 7:30 PM