Is it ever too early for children to start reading and learning?  As a parent and now grandparent we began reading to our children and grandchildren when they were just babies, as I’m sure many of you do.

One of our grandson’s favorite books, when he was a toddler, was The Very Hungry Caterpillar, By Eric Carle. This book also became a favorite of ours.

The fruits and food on the pages of the book that he eats even have little holes punched in the food for each day of the week. This shows the children that the little caterpillar has eaten through it. 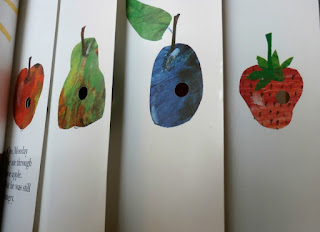 On Saturday the caterpillar eats through a whole lot of food and has a stomachache. On Sunday he eats one green leaf and now is a big fat, satisfied caterpillar.

The caterpillar builds himself a cocoon, and in two weeks nibbles, his way out and is a beautiful colorful butterfly.

His amazement as we turned to the last page when the caterpillar turns into a beautiful colorful butterfly. The look on his face was priceless.

Not only the first time but every time we read this book, as we would have to read it over and over again. Thank you, Eric Carle, for giving me this pleasure with my children, and now my grandchildren.

Eric Carle was born in 1929 and became a designer, illustrator, and writer of children’s books. He has illustrated and written more than 70 books and is most famous for The Very Hungry Caterpillar. There have been more than 162 million copies of his books sold around the world.

His knowledge and love for nature are the themes he writes into his books.  He believes his books bridge the gap between home and school. To him, a home represents warmth and security, and school is a strange new place with new people and surroundings.