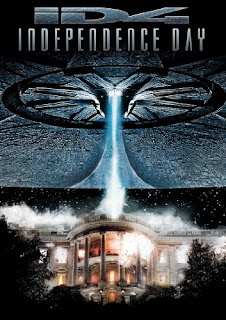 Will Smith as Captain Steven Hiller, and Bill Pullman as President Whitmore make a great combination as two of the main characters, highlighting an all-star cast of characters for this movie.

An Alien mother ship sends out spacecrafts over Earth’s major cities. Jeff Goldblum plays David Levinson a computer expert. David figures out the alien’s transmissions to be a timer coordinating their attack on the world.

David makes way to the White House, with his father played by Judd Hirsch. David’s ex-wife Margaret Colin as Constance Spano happens to be the White House Communications Director. She helps them get to the Oval Office to warn the President, but it’s too late, they need to get out of the White House and onto Air Force One, as the attack begins.

During the assault, and the counter attack by the United States, Captain Hiller, a fighter pilot lures one of the alien fighters over the Grand Canyon causing it to crash. After the crash he jumps up onto the alien ship opens the door and knocks him out, and begins to drag the alien across the desert. I just could not stop laughing, as the scene progressed.

Hiller and the alien are picked up by a convoy trying to escape the attacks, ending up in Area 51 where Air Force One has landed. All attacks on the alien mother ship have failed to this point. This is when Levinson figures out how to bring down the mother ship.

Many of you have seen this movie but just in case you haven’t I’ll stop here as not to spoil the what, and how the plan is carried out.

This movie has it all, as it took me through many emotions throughout the film. Hilarious as I was laughing out loud, sad at times ready to cry, sitting on the edge of my seat adventure and action.

Near the end of the movie President Whitmore’s (Bill Pullman) speech has been widely criticized for many reasons. I found the speech to be both patriotic and moving, and thought it to be one of best parts of the film.

You probably already know the sequel to this movie is coming soon. So, if you haven’t seen Independence Day you may want to before Independence Day: Resurgence is released in June of 2016. I really can't wait to see the sequel.
Posted by Sam Monaco at 12:47 PM