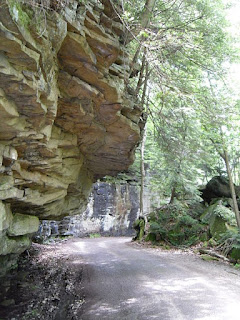 We spent many days there walking the trails and taking in all of the natural beauty; it’s a wonderful place any time of the year but especially in the fall.

Just to think about the amazing forces of nature, the bedrock was formed over 300,000,000 years ago as the mud and sand were compressed.

The layers of bedrock had different strengths some eroded quickly and others at a slower pace, as the continental plates shifted.

The geology of the park was also influenced by the glacial effects of the ice age, cutting out the gorge and leaving the Slippery Rock Creek at the bottom. The creek is 49 miles long and known for its slippery rocks. It is said to be named by the Indians for one huge slippery rock near a natural oil seep.

The Slippery Rock Gorge is a total of 930 acres, and in 1974 was named a National Natural Land Mark by the U.S. Department of Interior.

You'll see rock formations as big as houses; pictured here are the rocks you'll drive by on the way down to the gristmill and the covered bridge. Every time I visit I'm in Awe! The huge formation of rocks, the trees, and the creek all untouched for us to enjoy. All created by the forces of nature. 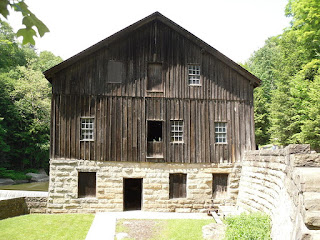 The Gristmill Where Nature and Man Come Together

Once at the bottom you'll see the gristmill. The mill was opened in 1852 by Daniel Kennedy; he had the foresight of using the forces of the water to process and grind oats, corn, buckwheat and wheat and the grains sold to the local residents. The mill burned to the ground in 1868, but was rebuilt and continued processing until it was closed in 1928.

Ownership changed in 1875 to the park's namesake Thomas McConnell.

McConnell replaced the water wheel with water turbines and grindstones with rolling mills, this is known to be one of the first rolling mills in the country.

You can tour the gristmill daily, there is a schedule of guided tours daily and on weekends, from Memorial Day to Labor Day. The land changed ownership several times and was formally dedicated as a State Park in 1957, and a Natural State Park in 1998. 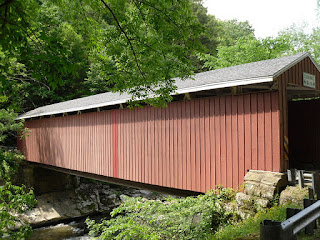 The bridge's construction is known as the Howe Truss, patented in 1840 by a Massachusetts millwright by the name of William Howe. The bridge is listed in the National Register of Historic Places. 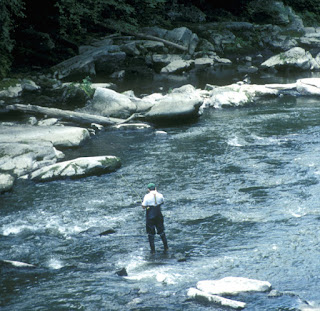 The Park is also known for its recreation:

Of course there is fishing in The Slippery Rock Creek, it's a popular spot for trout season.

Hiking and rock climbing are also popular at McConnells Mill. There are several trails to choose from. The trails are part of The North Country Trail, the nation’s longest scenic trail extending from North Dakota to New England.

For the adventuress rock climbers there are two climbing and rappelling areas. Both recommend for experienced climbers.

There is also canoeing and kayaking in the Slippery Rock Creek, and camping in the surrounding areas, as there is no camping allowed in the State Park.

I hope you enjoyed my tour of this beautiful State Park, it really is a wonderful place to visit.