Our family is now on the fourth generation of Steeler fans. And, we sure do have our fair share of Pittsburgh Steelers fan merchandise. In the photo is our son Sammy and his wife Tricia having fun at a Steeler game. 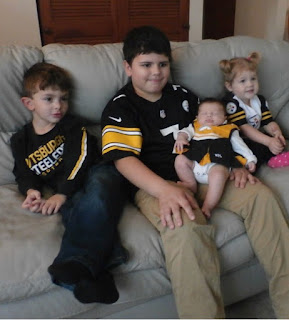 We grew up in a small town just about 35 miles north of Pittsburgh. This is a photo of our fourth generation of Steeler fans. Aren't they all just so cute?

I remember like it was yesterday the first Pittsburgh Steeler Super Bowl win in 1975. We defeated the Minnesota Vikings in Super Bowl IX. And, I say "We" like I was playing the game!

Known as the "City of Champions" in the 1970s for championships won by the Steelers, Pittsburgh Pirates (Baseball) and University of Pitt football team the Pitt Panthers.

The famous black and gold colors of Pittsburgh, adopted by the owner of the Steelers Art Rooney in 1933, and the Pirates in 1948, and then the Pittsburgh Penguins (NHL Hockey Team) in 1979.

Did you know? This makes Pittsburgh the only city in the United States where all three professional sports teams wear the same colors.

Some Pittsburgh Football Facts: Did you know that these famous NFL quarterbacks all came from the Pittsburgh area?

Well, that's enough about the history of Pittsburgh sports. As you might have guessed we are huge fans. If you live in this area I'm sure you're a fan, and even if you don't you may be a Pittsburgh Steelers fanatic.

Pittsburgh Steeler fan apparel makes great gifts for anybody on your list. Whatever the occasion sports gear seems to be a go-to gift.

And, if Pittsburgh isn't your team I won't hold that against you. Just click the banner below to find your teams' fan gear in any sport they have it all.

Pittsburgh Steeler Fan Gear
&
Posted by Sam Monaco at 11:01 AM