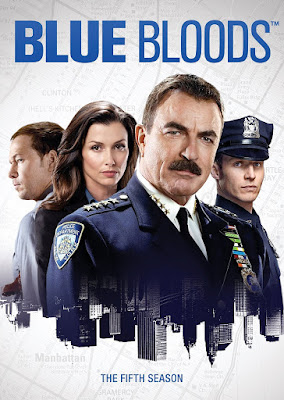 Blue Bloods first aired in September of 2010, and now in it's 6th season. When I learned that Tom Selleck was in it, I knew the show was going to be a hit.

I believe Tom Selleck has truly perfected his craft since he started out years ago in Magnum P.I. To me Tom Selleck has proven that he is an outstanding actor no matter what role he takes on.
The whole cast of this series comes together to make this a hit drama on CBS. Frank Reagan played by none other than (Tom Selleck) is the police Commissioner of New York City.

Frank's entire family is dedicated to law enforcement as even his father before him Henry Reagan was also the police Commissioner.

In every episode Frank Reagan has some moral or ethical problem to solve. His son Danny is a top notch detective, who sometimes bends the rules to bring a criminal to justice. He's always out there solving the latest crime.

Frank's daughter Erin, is the Manhattan assitant district attorney who brings the criminals to justice. Danny often looks to her for help, or advise so he can make an arrest, but doesn't always agree on the details of the law.

Frank's youngest son Jamie went to Harvard Law School, but has chosen the life of a New York City police officer. The first season revolves around Jamie as a rookie cop, going under cover to find out who killed his brother Joe.

Joe is Frank's middle son who was also a New York City detective killed in the line of duty, while undercover investigating dirty cops.

I like that in every episode the family sits down together for dinner. This is where the Reagan family is sitting around the Sunday dinner table, discussing the events of the week, which many time turns into conflict due to differing family opinion's.

This reminds me so much of our family Sunday dinners. Of course the Reagan's have a table big enough to seat the whole family; we always had a kids table.

Take some time to view the following video you'll be amazed at just what it takes to shot this family dinner scene.