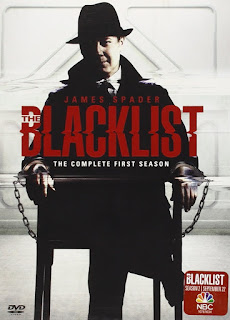 We have watched this series from day one when the Blacklist premiered in September of 2013, and now the series is going into its fourth season.

I'm a huge fan of James Spader as I thought that he was outstanding in his role that he played in the series, Boston Legal, I didn't miss an episode of that.

After watching the first episode of the Blacklist, I fell in love with it. I have to tell you I haven't seen this much suspense and intrigue since the series Alias, you can read all about Alias here. This was another television series that we never missed, staring Jennifer Garner.

A former government agent turned fugitive Reddington is now on the FBI Most Wanted list.  Raymond Reddington turns himself in, and professes to have a list of criminals that even the FBI doesn’t know about, and he will help bring them to justice under one condition. He will only work with a rookie profiler Elizabeth Keen.

As you watch every episode the suspense gets deeper, why will Reddington only work with Elizabeth Keen, who he calls Lizzy? He seems to know everything about her and will protect her at all costs.


There were so many questions left unanswered at the end of season one. Is Reddington really Keen’s father? Is Tom Keen Lizzy’s husband really a school teacher?

Now going into season four we have those answers, but the writers keep on creating new suspense and drama raising more and more questions at the end of every episode.

I for one look forward to tuning in every week I guess you could say I’m hooked on this one.
Posted by Sam Monaco at 8:33 AM